Sebastian Anthony – The “beautiful flowers” that you see above, and dotted throughout the rest of this story, are around 25 micrometers tall and 10 micrometers wide. A strand of human hair, in comparison, is around 100 micrometers thick. Even more impressively, these flowers self-assembled from three normal chemical compounds. Rather than just an exercise in aesthetics, though, scientists hope these nanoflowers can improve our scientific understanding of how immensely complex structures in nature, such as human embryos, self-assemble. 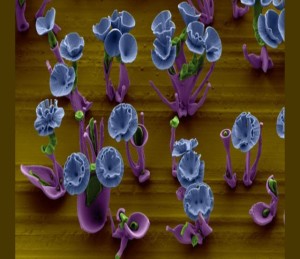 To create the flowers, scientists at Harvard start by dissolving barium chloride and sodium silicate into a beaker of water. At the bottom of the beaker, there’s a glass slide or metal blade. Then, without any kind of input from the scientists, carbon dioxide from the air starts to dissolve in the clear solution, starting a reaction that creates white barium carbonate crystals. As part of this chemical reaction, an acid is released into the area immediately surrounding the barium carbonate, lowering the local pH and preventing the creation of more barium carbonate. The dissolved sodium silicate, triggered by the acidic environment, jumps into action, coating the barium carbonate with a layer of silica and using up the acid. The process then starts again from the beginning. 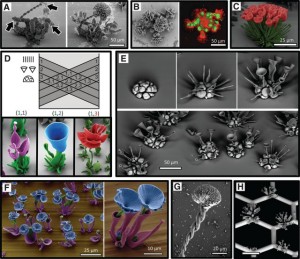 Now, what the scientists have discovered, is that the self-assembly process can be very finely controlled by varying the concentration of carbon dioxide, pH of the solution, and temperature. Increasing the amount of carbon dioxide, for example, creates broad-leafed structures. By exactly controlling the environment for a few hours, it’s possible to build nanoflowers — or indeed, probably many other shapes as well. We should probably note at this point that these pictures are false-color scanning electron microscope images; in reality, the flowers are white. (Though, considering they’re smaller than the eye can see, the color probably doesn’t matter.)

As for why these flowers are actually an important scientific breakthrough, you need only look at nature, where self-assembly rules supreme. It is due to local chemical gradients — differences in pH, or signaling molecules emitted from living cells — that incredibly complex structures arise. This knowledge might allow us to meddle with existing self-assembled systems, to create weird and wonderful Frankensteins, but the more likely scenario is that we will use it to inspire our own, human-made, biomimetic self-assembled materials. After all, when you’re working on chips or materials that have nanometer-scale features, self-assembly is really the only viable route towards commercial scale production.