JUST a CURIOSITY: Oracle Software and the CIA

Oracle’s Connection to the CIA

Most Oracle professionals are surprised to learn that the name “Oracle” originates from the name of a CIA project.  This article in Forbes Magazine notes that Oracle billionaire Larry Ellison worked on a CIA project with the code-name “Oracle“: 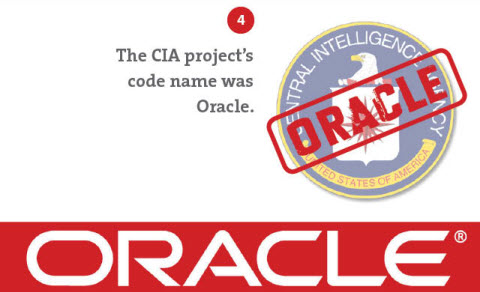 “He [Larry Ellison] dropped out of the University of Chicago in the 1960s, headed to Berkeley, Calif. and by the mid-1970s began working on a database project.

In 1977, Ellison founded the company with Robert Miner and Edward Oates, naming it after the CIA job.”

HOW TO TELL ORACLE CORP. FOUNDER LARRY ELLISON FROM GOD

Oracle’s coziness with government goes back to its founding / Firm’s growth sustained as niche established with federal state agencies SFGATE.com | May 20, 2002 … Company co-founders Larry Ellison Robert Miner and Ed Oates worked on Project Oracle at a consulting firm before striking out on their own.

A quarter century later close to a quarter of the company’s revenue — $2. 5 billion a year — still comes from selling software to federal state and local agencies.
“Oracle wouldn’t exist if it weren’t for government contracts,” said Mike Wilson, author of the book The Difference Between God and Larry Ellison.
Oracle has 1000 sales and consulting workers focused exclusively on government work. And in the wake of Sept. 11 Oracle is counting on the heightened interest in staving off terrorism to boost its government ties even more.

Oracle has been actively pitching software to local governments to create detailed digital maps that could be used to respond to attacks. In March the company formed a partnership to focus on airport security. Ellison even offered to give the federal government software to help create a national ID to thwart terrorists.
In a background paper Oracle boasts that it is “very active in homeland security.”

Banc of America Securities analyst Bob Austrian believes the entire high-tech industry could profit from the increased security spending. But he suspects Oracle could do better than most because it already has an unusually large share of government contracts and is in a particularly relevant niche.
“The majority of interest surrounds tracking individuals and information which by its nature is a database-intensive application” he said.

So perhaps it’s fitting that Oracle is making headlines because of concerns over the recent $95 million government contract.

Among the allegations are that Oracle persuaded California officials to buy more software than needed misrepresent the costs savings and rush through a no-bid award without considering alternatives. It didn’t help that Oracle handed a $25000 check to Gov. Gray Davis’ technology adviser just two weeks after the deal was signed.

ORACLE NEWS ARCHIVE
An excellent database of news stories about Oracle, hosted by Newsrunner, is here.