The Truth – A plan being pushed in Congress right now by senators from both major political parties would force all Americans to get a biometric national ID card.  It is being promoted as a key “immigration reform” measure, but the truth is that a national ID card is much more about the government’s endless appetite for more control over the American people.  If this national ID card plan is passed by Congress, you will not be able to get a job without one.  So how are you going to survive if you can’t work?  In addition, this national ID card would undoubtedly soon be used to identify us for all sorts of other purposes.

For example, have you tried to open up a bank account lately?  They make you jump through all sorts of hoops to prove that you are who you say that you are.  So what would happen if the government decided to require you to show your national ID card before opening up a bank account?  If you refused to get a card, how would you be able to function in society without a bank account?  Would you try to conduct all of your transactions in cash only?  That might work for a while.  And of course you would not be able to drive or get on a plane without your national ID card.  So forget about going anywhere. 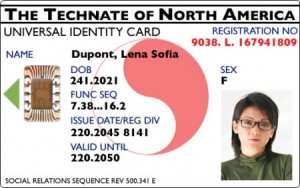 Are you starting to get the picture?  Unfortunately, the push for a national ID card in the United States is only a small part of the overall push toward a “global ID card” that is happening all over the planet.  The eventual goal is to have a “universal ID” that every man, woman and child on the planet will be forced to take.

That is why it is so important for the American people to speak up about this.

Right now, all of the big mainstream media outlets are lining up on the side of a national ID card.  For instance, just check out this short excerpt from a recent Washington Post article entitled “The case for a national ID card“…

An effective solution would be to issue tamper-proof, biometric ID cards — using fingerprints or a comparably unique identifier — to all citizens and legal residents. Last week, both President Obama and a bipartisan group of eight senators seeking immigration reform urged something along those lines, without calling it a universal national identity card. That’s a major step forward.

Key senators are exploring an immigration bill that would force every U.S. worker—citizen or not—to carry a high-tech identity card that could use fingerprints or other personal markers to prove a person’s legal eligibility to work.

The idea, signaled only in vaguely worded language from senators crafting a bipartisan immigration bill, has privacy advocates and others concerned that the law would create a national identity card that, in time, could track Americans at airports, hospitals and through other facets of their lives.

According to investigative reporter James Tucker, there are those in the Obama administration that are optimistic that they will be able to get a national ID card through Congress now that Ron Paul has left the House of Representatives…

At a recent reception in Washington, D.C., an AMERICAN FREE PRESS source overheard Thomas E. Donilon, a White House national security advisor and past Bilderberg member, speaking of Paul’s retirement and the good chance that the global card could now be shepherded through Congress. Paul’s son, Senator Rand Paul (R-Ky.), would not object to the plan, added the individual with whom Donilon was talking. He was referring to the fact that Senator Paul has backed off from the strong pro-nationalist positions of his father because he is fantasizing about being elected president in 2016.

So will anyone in Congress step up and fight this on behalf of the American people?

But of course there are many other large nations that are actually far ahead of the United States when it comes to implementing this global ID card scheme.

Just check out what is going on in Indonesia…

Since the start of the government of Indonesia’s multi-modal biometrics-based National Electronic ID Card (e-KTP) program in August 2011, record enrollments are being achieved across the country’s population of 172 million ID-eligible residents.

In India, a massive effort is underway to collect biometric identity information for each of the country’s 1.2 billion people. The incredible plan, dubbed the “mother of all e-governance projects” by the Economic Times, has stirred controversy in India and beyond, raising serious concerns about the privacy and security of individuals’ personal data.

The plan is moving ahead at a clip under the auspices of the National Population Register (NPR) and the Unique ID (UID) programs, separately governed initiatives that have an agreement to integrate the data they collect to build the world’s largest biometric database. Upon enrollment, individuals are issued 12-digit unique ID numbers on chip-based identity cards. For residents who lack the necessary paperwork to obtain certain kinds of employment or government services, there’s strong incentive to get a unique ID. While the UID program is voluntary, enrollment in the NPR program is mandatory for all citizens.

Are you starting to understand what is happening?

This is a global effort.

At this point, there are approximately 100 countries that now issue mandatory ID cards, and undoubtedly this campaign to gather the biometric information of every person on earth will continue to spread.

In fact, soon you may not even be able to log in to your favorite Internet sites without a fingerprint or an iris scan.

Does that sound crazy to you?

It might seem a bit much for the average computer user, but it may not be that far off if an initiative is successful.

The use of biometric data as an added security measure is just one of the solutions being proposed by a consortium of firms who have come together to form the Fast Identity Online (FIDO) Alliance.

At first, we may all just be forced to carry around ID cards, but eventually cards will not be considered to be good enough.

But what about an electronic tattoo?

Wouldn’t that be much more secure?

That is the argument that will be made.

Does that sound “cool” to you?

That is how these changes will be marketed to the public.  They will be sold as the “hip” and “cool” things to do.

The devices are less than 100 microns thick, the average diameter of a human hair. They consist of circuitry embedded in a layer or rubbery polyester that allow them to stretch, bend and wrinkle. They are barely visible when placed on skin, making them easy to conceal from others.

The devices can detect electrical signals linked with brain waves, and incorporate solar cells for power and antennas that allow them to communicate wirelessly or receive energy. Other elements can be added as well, like thermal sensors to monitor skin temperature and light detectors to analyze blood oxygen levels.

This is very frightening stuff.

But most people just do whatever the “authorities” tell them to do without thinking about it.

So will you take a national ID card if Congress requires you to?

Will you take an electronic tattoo on your hand or your forehead someday if the authorities require it for “security” reasons?

The control freaks that run things just love to find new ways to watch us, track us and control us.

For example, just check out what is going on in New York City.  The following is from a recent article in the Telegraph…

Created by Microsoft and the New York Police Department, the Domain Awareness System, known as “the dashboard,” is state-of-the-art crime fighting technology.

“The dashboard,” instantaneously mines data from the NYPD’s vast collection of arrest records, emergency 911 calls, more than 3,000 security cameras, license plate readers and portable radiation detectors and aggregates it into a user-friendly, readable form in the control room.

Eventually, that data will be able to be seen in real time by officers on laptops in their squad cars and on mobile devices as they walk their beat.

Could you imagine how much more intrusive such a system would be if “national ID cards” were constantly feeding information about all of us into their computers?

But the “authorities” insist that all of this “security” is making life so much “better” and “safer” for all of us.

Well, what about for 3-year-old Lucy Schulte?

She is a sweet little disabled girl in a wheelchair that has Spina bifida.  Recently she was getting ready to get on a plane to go to Disney World, but TSA workers decided that she was a potential terrorist and so they manhandled her and confiscated her stuffed toy.

You can see very disturbing video of this incident below…

Is this really want we want America to become?

For much more on how America is being transformed into a Big Brother police state, please see the following article: “29 Signs That The Elite Are Transforming Society Into A Total Domination Control Grid“.

So what do you think about all of this?

Do you believe that a global ID card is a good idea or a bad idea?

Would you take a national ID card if Congress made it mandatory?