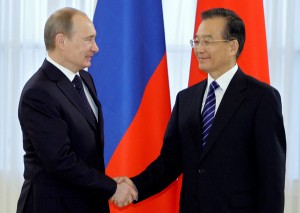 St. Petersburg, Russia – China and Russia have decided to renounce the US dollar and resort to using their own currencies for bilateral trade, Premier Wen Jiabao and his Russian counterpart Vladimir Putin announced late on Tuesday.

Chinese experts said the move reflected closer relations between Beijing and Moscow and is not aimed at challenging the dollar, but to protect their domestic economies.

“About trade settlement, we have decided to use our own currencies,” Putin said at a joint news conference with Wen in St. Petersburg.

The two countries were accustomed to using other currencies, especially the dollar, for bilateral trade. Since the financial crisis, however, high-ranking officials on both sides began to explore other possibilities.

The yuan has now started trading against the Russian rouble in the Chinese interbank market, while the renminbi will soon be allowed to trade against the rouble in Russia, Putin said.

“That has forged an important step in bilateral trade and it is a result of the consolidated financial systems of world countries,” he said.

Putin made his remarks after a meeting with Wen. They also officiated at a signing ceremony for 12 documents, including energy cooperation.

The documents covered cooperation on aviation, railroad construction, customs, protecting intellectual property, culture and a joint communiqu. Details of the documents have yet to be released.