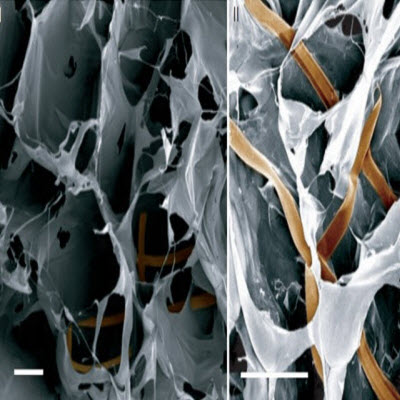 Bioengineers at Harvard University have created the first examples of cyborg tissue: Neurons, heart cells, muscle, and blood vessels that are interwoven by nanowires and transistors.

These cyborg tissues are half living cells, half electronics. As far as the cells are concerned, they’re just normal cells that behave normally — but the electronic side actually acts as a sensor network, allowing a computer to interface directly with the cells. In the case of cyborg heart tissue, the researchers have already used the embedded nanowires to measure the contractions (heart rate) of the cells.

To create cyborg flesh, you start with a three-dimensional scaffold that encourages cells to grow around them. These scaffolds are generally made of collagen, which makes up the connective tissue in almost every animal. The Harvard engineers basically took normal collagen, and wove nanowires and transistors into the matrix to create nanoelectric scaffolds (nanoES). The neurons, heart cells, muscle, and blood vessels were then grown as normal, creating cyborg tissue with a built-in sensor network. 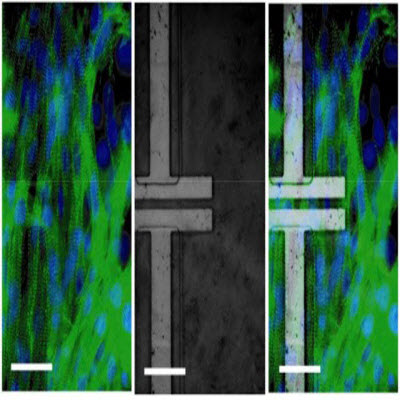 So far the Havard team has mostly grown rat tissues, but they have also succeeded in growing a 1.5-centimeter (0.6in) cyborg human blood vessel. They’ve also only used the nanoelectric scaffolds to read data from the cells — but according to lead researcher Charles Lieber, the next step is to find a way of talking to the individual cells, to “wire up tissue and communicate with it in the same way a biological system does.” 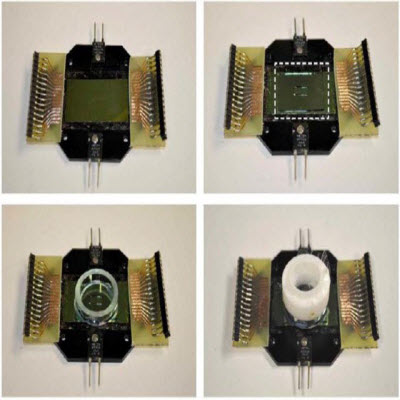 A computer chip, containing a sample of nanoES tissue

Suffice it to say, if you can use a digital computer to read and write data to your body’s cells, there are some awesome applications. If you need a quick jolt of adrenaline, you would simply tap a button on your smartphone, which is directly connected to your sympathetic nervous system. You could augment your existing physiology with patches — a patch of nanoelectric heart cells, for example, that integrates with your heart and reports back if you experience any problems. When we eventually put nanobots into our bloodstream, small pulses of electricity emitted by the cells could be used as guidance to damaged areas. In the case of blood vessels and other organs, the nanoelectric sensor network could detect if there’s inflammation, blockage, or tumors.

Realistically, though, we’re a long way away from such applications. In the short term, though, these cyborg tissues could be used to create very accurate organs-on-a-chip — lab-grown human organs that are encased within computer chips and then used to test drugs or substance toxicity, without harming a single bunny or bonobo.