Currently, the illuminati agenda is a kind of world planning in which the population would be massively cut back in order to create a more pristine environment for the 500 million or so that remain.

Researcher of esoteric history, Alan Watt discussed how ultra high level sects have controlled the course of history to a pre-determined goal and are still in power. 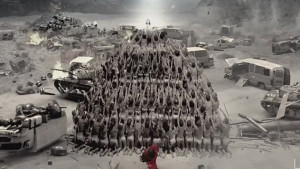 This might be achieved by a “scientific dictatorship” denying food to countries that overpopulate, he outlined, and chaos installed by pandemics, quakes and war, that would ready a populace for control by a “new world order.” Among those behind such plans, he pointed towards the upper echelon of societies such as the Rosicrucians and the Freemasons, the Rhodes Foundation, futurist think tanks and the creators of the Project for the New American Century.

Ultimately the Illuminati seek to create a new clone type, hermaphroditic in nature, that could replicate itself on space journeys, and eliminate the need for women, Watt suggested. To fight back, people should inform themselves from the available data and bombard their politicians to put a stop to such plans, he said.

Alan Watt has questioned standard versions of history, and delved into ancient civilizations and the occult groups which managed them. Since 1998, Alan has come forward to share his knowledge, beginning with the Sweet Liberty Radio program on international short wave.  This short wave broadcast ended late 2005 and continues on First Amendment Internet Radio every Wednesday at 9 p.m. EST. Having a deep understanding of mass-mind control being used on the general public, his original intention was to establish contact with various individuals following the broadcast by a one-on-one telephone conversation containing a technique to bring the person up into awareness. Many hundreds of hours have been spent in this manner, teaching people in various countries, some of whom have used the information and published much of it with rather flamboyant spins.

The common theme in “conspiracy theories” about a New World Order is that a secretive power elite with a globalist agenda is conspiring to eventually rule the world through an authoritarian world government—which replaces sovereign nation-states—and an all-encompassing propaganda that ideologizes its establishment as the culmination of history’s progress. Significant occurrences in politics and finance are speculated to be orchestrated by an unduly influential cabal operating through many front organizations. Numerous historical and current events are seen as steps in an on-going plot to achieve world domination through secret political gatherings and decision-making processes.

Prior to the early 1990s, New World Order conspiracism was limited to two American counter cultures  primarily the militantly anti-government right, and secondarily fundamentalist Christians concerned with end-time emergence of the Antichrist. Sceptics  such as Michael Barkun and Chip Berlet, have observed that right-wing populist conspiracy theories about a New World Order have now not only been embraced by many seekers of stigmatized knowledge but have seeped into popular culture, thereby inaugurating an unrivalled period of people actively preparing for apocalyptic millenarian scenarios in the United States of the late 20th and early 21st centuries.

These political scientists are concerned that this mass hysteria could have what they judge to be devastating effects on American political life, ranging from widespread political alienation to escalating lone-wolf terrorism.

JPMORGAN: Here's What You Need To Know About The Radical Comedian Who's Offering Everyone In Italy A Free iPad