Ellen Brown – The “fiscal cliff” has all the earmarks of a false flag operation, full of sound and fury, intended to extort concessions from opponents.  Neil Irwin of the Washington Post calls it “a self-induced austerity crisis.”  David Weidner in the Wall Street Journal calls it simply theater, designed to pressure politicians into a budget deal:

The cliff is really just a trumped-up annual budget discussion. . . The most likely outcome is a combination of tax increases, spending cuts and  kicking the can down the road.

Yet the media coverage has been “panic-inducing, falling somewhere between that given to an approaching hurricane and an alien invasion.”  In the summer of 2011, this sort of media hype succeeded in causing the Dow Jones Industrial Average to plunge nearly 2000 points.  But this time the market is generally ignoring the cliff, either confident a deal will be reached or not caring. 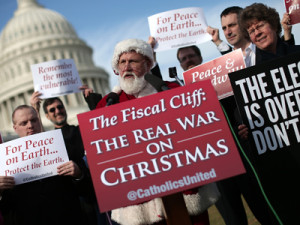 The goal of the exercise seems to be to dismantle Social Security and Medicare, something a radical group of conservatives has worked for decades to achieve.  But with the recent Democratic victories, demands for “fiscal responsibility” may just result in higher taxes for the rich, without gutting the entitlements.

The problem is that no deal is going to be satisfactory.  If we go over the cliff, taxes will be raised on everyone, and GDP is predicted to drop by 3%.  If a deal is reached, taxes will be raised on some people, and some services will be cut.  But the underlying problems – high unemployment and a languishing economy – will remain.  More effective solutions are needed.

Be Careful What You Wish for:  Fiscal Hostage-Taking Could Backfire

Taxpayers and governments that are pushed too far have been known to resort to more radical measures, and there are some on the table that could fix the problem at its core.

Here are a few that are receiving media attention:

1.  A financial transactions tax.  While children’s shoes and lunchboxes are taxed at nearly 10%, financial sales have so far gotten off scot-free.  The idea of a financial transactions tax, or Tobin tax, has been kicked around for decades; but it is now gaining real teeth.  The European Commission has backed plans from 10 countries — including France, Germany, Italy and Spain — to launch a financial transactions tax to help raise funds to tackle the debt crisis.  Sarah van Gelder of Yes! Magazine observes that the tax would not only help reduce deficits but would hit the highest income earners, and it would cool the speculative fever of Wall Street.

Simon Thorpe, a financial blogger in France, cites figures from the Bank for International Settlements, showing total U.S. financial transactions of nearly $3 QUADRILLION in  2011.  Including other sources, he derives a figure of $4.44 QUADRILLION.  Even using the more “conservative” $3 quadrillion figure, a tax of a mere 0.05% (1/20th of 1%) would be sufficient to raise $1.5 trillion yearly, enough to replace personal income taxes with money to spare.

2.  The trillion dollar coin trick.  If Republicans insist on the letter of the law, Democrats could respond with a law of their own.  The Constitution says that Congress shall have the power to “coin money” and “regulate the value thereof,” and no limit is put on the value of the coins Congress creates, as was pointed out by a chairman of the House Coinage Subcommittee in the 1980s.

I actually suggested this solution in Web of Debt in 2007, when it was just a “wacky idea.”  But after the 2008 banking crisis, it started getting the attention of scholars.  In a December 7th article in the Washington Post titled “Could Two Platinum Coins Solve the Debt-ceiling Crisis?,” Brad Plumer wrote that if Congress doesn’t raise the debt ceiling as part of the fiscal cliff negotiations, “then some of these wacky ideas may get more attention.”

Ed Harrison summarized the proposal at Credit Writedowns like this:

Plumer cites Yale Law School Professor Jack Balkin, confirming the ploy is legal.  He also cites Joseph Gagnon of the Peterson Institute for International Economics, stating, “I like it.  There’s nothing that’s obviously economically problematic about it.”

To the objection that it is a legal trick that makes a mockery of the law, Paul Krugman responded, “These things sound ridiculous — but so is the behavior of Congressional Republicans.  So why not fight back using legal tricks?”

3.  Declare the debt ceiling unconstitutional.  The 14th Amendment to the Constitution mandates that Congress shall pay its debts on time and in full, and Congress does not know how much it will collect in taxes until after the bills have been incurred.  The debt ceiling was imposed by a statute first passed in 1917 and revised multiple times since.   The Constitution trumps it and should rule.

4.  Borrow interest-free from the government’s own central bank.  If the government refinanced its entire debt through the Federal Reserve, it could save nearly half a trillion dollars annually in interest, since the Fed rebates its profits to the government.  The Fed’s newly-announced QE4 adds $45 billion monthly in government securities purchases to the $40 billion for mortgaged-backed securities declared in QE3, and no time limit has been designated for ending the program.  Forty-five billion dollars monthly is over half a trillion yearly.  Added to the federal debt already held by the Fed, the whole $16 trillion federal debt could be bought back in 28 years.

This is not a wild, untested idea.  Borrowing interest-free from its central bank was done by Canada from 1939 to 1974, by France from 1946 to 1973, and by Australia and New Zealand in the first half of the 20th century, to excellent effect and without creating price inflation.

5.  Decommission some portion of the military.  When past costs are factored in, nearly half the federal budget goes to the military.  The data speaks for itself.  I wrote about it here.

6.  Debt forgiveness.  Economists Michael Hudson and Steve Keen maintain that the only way out of debt deflation is debt forgiveness.  That could be achieved by the Fed by buying up $2 trillion in student debt and other asset-back securities and either ripping them up or refinancing the debts interest-free or at very low interest.  If the banks can borrow at 0.25%, why not the people?

7.  Publicly-owned state and local banks.  Municipal governments are facing cliffs of their own.  Ann Larson, writing in Dissent Magazine, blames predatory Wall Street lending practices, which have inflicted deep and growing suffering on communities across the country.

Predatory Wall Street practices can be avoided by establishing publicly-owned state and local banks, which leverage the public’s funds for the benefit of the public.  The profits are returned as dividends to the local government.  German researcher Margrit Kennedy calculates that a whopping 40% of the cost of public projects, on average, goes to interest.  Publicly-owned banks slash borrowing costs by returning this interest to the government, along with many other advantages, detailed here.

Unshackle the Hostages and Let the Good Times Roll

The fiscal cliff has been said to be holding Congress hostage to conservative demands, but the real hostages are the debt slaves of our financial system.  The demand for “fiscal responsibility” has been used as an excuse to impose radical austerity measures on the people, measures that benefit the 1% while locking the 99% in debt.

The government did not demand fiscal responsibility of the failed financial sector.  Rather, Congress lavished hundreds of billions of dollars on it, and the Fed lavished trillions more.  No evident harm from these measures befell the economy, which has fared better than the austerity-strapped EU countries.  Another couple of trillion dollars poured directly into the real, productive economy could give it a serious boost.

According to the Fed’s figures, as of July 2010, the money supply was actually $4 trillion LESS than in 2008.  (The shrinkage was in the shadow banking system formerly reported as M3.)  That means $4 trillion could be added back into the money supply before general price inflation would be a problem.

The self-induced austerity crisis is a diversion from the real crises, including unemployment, the housing crisis, a bloated military, and unrepayable debt.  Slashing services, selling off public assets, and raising taxes won’t cure these ills.  To maintain a sustainable and productive economy requires a visionary leap into the new.  A new economy needs new methods of public financing.