NaturalNews – While millions of Americans were busy watching the elephant puppet battle the ass puppet at the latest political circus, the United States Congress  quietly introduced a new piece of legislation ordering the Federal Emergency  Management Agency (FEMA) to begin preparing for mass casualties throughout  the country.

House Resolution 6566, also known as the Mass Fatality  Planning and Religious Considerations Act, would amend the Homeland  Security Act of 2002 to mandate that FEMA immediately begin conducting “mass  fatality planning” in preparation for a major event or series of events that may  kill off untold numbers of people. 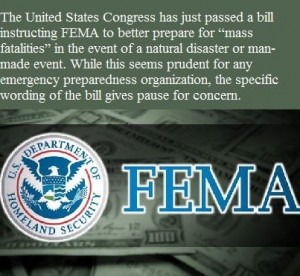 Introduced by Rep. Laura Richardson  (D-Ca.), H.R. 6566 provisions that the Administrator of FEMA — William Craig  Fugate currently holds the Administrator position at FEMA (http://www.fema.gov/leadership/william-craig-fugate) —  provide “guidance and coordination” for dealing with a mass casualty event  arising from a natural disaster, terrorist act, or “other man-made  disaster.”

The bill also ominously sets up the FEMA Administrator as a  type of emergency dictator with the power to control how local communities,  private businesses, nonprofit organizations, religious organizations, and even  individuals prepare for and respond to a mass fatality event.

“Funeral  homes, cemeteries, and mortuaries could be overwhelmed should mass fatalities  arise from a natural  disaster, act of terrorism, or other man-made disaster,” says the legislation,  which also specifies the manner in which people with certain religious  affiliations should be buried following their deaths.
You can read the  disturbing legislation in full at the following link: http://www.govtrack.us

Is the federal government preparing for a massive false flag event?

Contrary to what is being reported by some sources, H.R. 6566 has not  yet been passed by either the House of Representatives nor the Senate, which  means it has not yet become law. According to govtrack.us, the bill was  referred to a congressional committee on September 28 for consideration, and has  yet to be reported on by that committee. (http://www.govtrack.us/congress/bills/112/hr6566)

Even  so, the bill’s introduction is troubling to say the least, especially in light  of the federal government’s recent purchases of large stocks of hollow-point  ammunition (http://www.naturalnews.com/035649_DHS_ammunition_domestic_war.html),  meat, emergency supplies, and riot gear.

It seems as though  occupiers at all levels of the federal government know something that the rest  of us do not know, which would explain their mad rush throughout the past couple  of years to pass various “continuity of government” legislation and executive  orders, including the more recent National Defense and Authorization Act  (NDAA) that provisioned for indefinite detention of American citizens.

When put into  perspective, all these bills and executive orders point to something massive  occurring in the very near future, whether that be a major natural disaster, an  economic collapse, a false flag terror attack, or perhaps even World War III.  Whatever the case may be, the federal government most certainly appears to be  preparing for its own post-disaster survival at the expense of ours.

May 25 ‘March Against Monsanto’ planned for over 30 countries

JPMORGAN: Here’s What You Need To Know About The Radical Comedian Who’s Offering Everyone In Italy A Free iPad