FOXnews – TEHRAN, Iran – Iran’s top leader said Wednesday that European countries are “foolish” to support sanctions against Tehran, telling them they are sacrificing themselves for the sake of the United States. 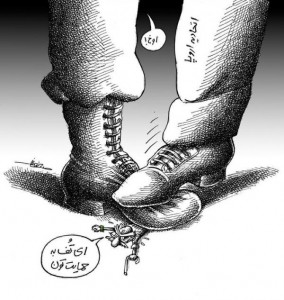 Speaking a week after a dramatic decline in the value of the Iranian rial, Supreme Leader Ayatollah Ali Khamenei admitted that the economic measures taken by the West against Iran for its controversial nuclear program have caused problems, but said the Islamic Republic will overcome the difficulties.

He said Europeans are facing far more complicated economic problems than Iranians, a reference to the continent’s debt and its own currency woes.

The EU imposed an oil embargo against Iran in July, adding to U.S.-led sanctions that also prohibit the world’s banks from completing oil transactions with Iranian banks and further complicate Iran’s ability to conduct international commerce.

“They are sacrificing themselves for the sake of America and it’s foolish,” he told a crowd in the northeastern city of Bojnourd in a speech broadcast on state TV. “This (sanctions) is a war against a nation. Of course, with the grace of God, they will be defeated by the Iranian nation in this war.”

The sanctions have been imposed over Iran’s refusal to halt its uranium enrichment program, a technology that can be used to produce nuclear fuel or materials for use in a warhead.

The U.S. and its allies accuse Iran of using its civilian nuclear program as a cover to develop nuclear weapons. Tehran has denied the charges, saying its program is peaceful and geared towards generating electricity and producing radioisotopes to treat cancer patients.

“They (sanctions) may create problems. Mismanagement may even increase these problems. That’s correct but it’s not something the Islamic Republic can’t resolve,” Khamenei said.

The plummet of the rial was blamed on a combination of Iranian government mismanagement and the bite from tighter sanctions. Both measures have reduced the amount of foreign currency coming into the country.

The plummeting value of the rial was marked by a day of limited street protests. They have since died down, and Khamenei downplayed their impact.

“For an hour or two a number of people set two or three garbage cans on fire in a couple of streets in Tehran, and they (the Westerners) started to celebrate and said there are protests in Iran,” Khamenei. “Is our situation worse than yours? There have been protests on streets of major European countries for around one year, during day and night.”

“Your problem is far more complicated than ours. Your economy is frozen. Do you celebrate that Iran’s economy has been weakened? It’s you that are wretched,” he said.

Iranian officials have called the sanctions a “heavy battle” and Khamenei has pushed for a “resistant economy” to counter the sanctions. Officials say Iran should stop depending on sales of raw materials such as oil, and instead promote “knowledge-based” high-tech companies.