Mass Rally in Venice to Call for Independence from Italy

Two centuries after Napoleonic forces snuffed out the 1,000-year Venetian Republic, Venetians are once again aspiring to become an independent state.

By Nick Squires, Rome – Inspired by the nationalist aspirations of Scotland and Catalonia, pro-independence campaigners will hold a mass rally in the heart of the lagoon city on Saturday, calling for an urgent referendum to be held on the issue. 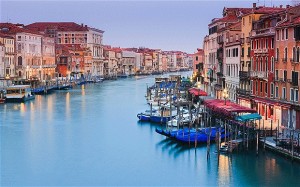 Indipendenza Veneta, a newly-founded pro-independence movement, says it expects several thousand people to turn up for the rally.

They will be ferried across the Grand Canal in gondolas to deliver a “declaration of independence” to the headquarters of the Veneto regional government.

It may sound fanciful, and it will be fiercely resisted by Rome, but activists want to carve out a new country in north-eastern Italy which would comprise Venice, the surrounding region of Veneto and parts of Lombardy, Trentino and Friuli-Venezia Giulia.

The “Repubblica Veneta“, as it would be known, would encompass about five million people.

Recent surveys show widespread support for independence among Venetians, who speak a distinct dialect and feel geographically and culturally distant from Rome.

A poll conducted by Corriere della Sera in September found that 80 per cent were in favour of independence.

A more recent poll by Il Gazzettino, a local newspaper, found a slightly lower but still overwhelming level of support – 70 per cent.

The political movement was formed in May and shortly afterwards presented a petition with 20,000 signatures to Luca Zaia, the governor of the Veneto region.

“We have gained a lot of momentum from what is happening in Scotland and Catalonia and things are moving fast,” Lodovico Pizzati, the head of the movement, told The Daily Telegraph on Friday.

“And we are building on a very strong base – calls for independence for the Veneto region go back to the 1970s. It may sound crazy but I think Veneto will become independent before Scotland or Catalonia.”

Mr Zaia has acknowledged the high level of support for independence but said there is no constitutional basis for Venice and the surrounding region to secede from Italy.

The pro-independence activists say they have meanwhile referred their case to José Manuel Barroso, the president of the European Commission.

“We argue that our right to self-determination is being violated,” said Prof Pizzati, a former World Bank economist who now lectures at Venice’s Ca’ Foscari University.

Italy’s economic crisis has only exacerbated Venetians’ resentment against the central government in Rome.

“The economic situation here is really desperate, with the recession hitting small and medium-sized businesses. Meanwhile of the 70 billion euros we pay in taxes to Rome, we get back about 50 billion euros, directly and indirectly. We are losing out on 20 billion euros a year,” said Prof Pizzati.

After more than a millennia of independence, the Most Serene Republic of Venice, La Serenissima, was invaded by Napoleonic forces in 1797, with the French deposing the last doge.

After a few decades under Austrian rule, Venice and the surrounding region was incorporated into Italy in 1866, five years after the unification of the rest of the country.

Base HAARP in Sicilia